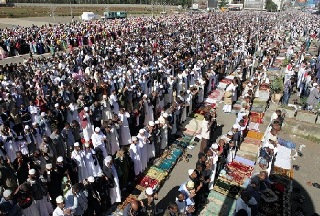 Eid Al-Fitr is an Islamic festival celebrated amongst Muslims in Ethiopia and world-wide. It is a festival mainly of the breaking of the Ramadan Fast. It’s is also called the sugar feast or the sweet festival.

The muslim faithful fast 29 or 30 days breaking it at the dawn of Eid Al-Fitr (depending on the moon sighting over Mecca) as mentioned in the Quran. This day has a particular way of Salatel or way of prayer and followers pay the Zakat and Fitra before offering their prayers.

As the Salatel Eid is commanded to be prayed by the mass, Ethiopian muslims do so in most cities and towns, the most prominent one being the National Stadium of Addis Ababa.

The day begins by cleansing oneself and getting ready for prayer of thanksgiving to Allah with a clear body and mind. Wearing new clothes is one of main themes of the festival, as well as paying Zakat (remembering the dead by giving money to the needy) and Fitra which is feeding the less able or the poor to break their fast.

After prayer or Salatel Eid, Ethiopian Muslims go back to their homes to celebrate by Eating the delicacy prepared for the occasion followed by sweets and Khat. The day continues to be celebrated by Zeyira or visiting each other to say Eid Mubārak .

History of Islam In Ethiopia

When Prophet Mohammad was threatened of being destroyed by his opponents he sent his close family members and followers of his new religion to go to Ethiopia where he believed they could be safe and treated with respect and dignity.

“The Prophet Mohammed realized that he could not protect his followers form the attacks, and said ‘go to the Habesha, there is a Christian king there. There is justice in his kingdom.

Habesha is the land of truth. Therefore, go there until we achieve victory with the help of Allah.” ~ Ibn Eshaq~Bilal (an Ethiopian) was Prophet Mohammad’s first Muaddhin/Muezzin in Islam throughout his lifetime he was the person appointed in the mosque to lead, and recite, the call to prayer (adhan azzan) for every event of prayer and worship in the mosque.