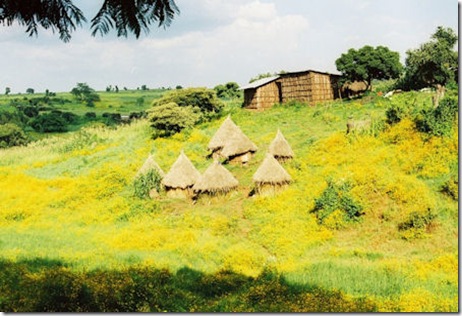 Ethiopian New Year (Enqutatash) is one of the pre-eminently celebrated festivals of all. Marked on Meskerem 1st of the Ethiopian calendar or September 11th of the European Calendar. It is an Ethiopian holiday shared among people of all religions and almost all cultures throughout the country. It is a season where the three months heavy rain ends and the sun comes out.

Daisies blossom all over the mountains and fields change into bright yellow, which is a major eminence of the holiday. It is a period when the old bless the young and the young hope for new prospects, which New Year brings about.

The festival varies from region to region as to how it is celebrated. Ethiopians celebrate the New Year starting from the eve by burning a more like Christmas tree made out of twigs in front of their houses.

The aroma of the traditional bread being baked in conventional ovens, and the sounds of animals bought and ready to be slaughtered for the next day makes the eve more remarkable.

The actual New Year day starts by slaughtering of the animals, blessing the bread and Tella (a traditional brew), followed by preparing a special lunch, which consists of the main dishes Injera and wot. Injera is made out of an indigenous cereal grain and wot is mainly stew made out of either chicken or lamb.

While adults are responsible for the preparation of food and drinks children have their own way of celebrating. The boys prepare hand painted pictures of flowers and angels, which they give out to neighbours and relatives going door to door.

They are in return given money or the traditional bread. The girls sing in groups dressed in their beautiful white cultural dresses, standing in front of neighbour’s gates too.

Families gather around to share the feast, which is followed by the traditional coffee ceremony. In the afternoon people go to their loved ones to wish them a happy new year bringing gifts such as (Areqe) a local liquor, oven baked bread or just bouquets of the seasonal daisies with them.

The day culminates with wishing well of each other, drinking and entertainment with family, friends, neighbours as well as relatives.