The Battle of Adwa 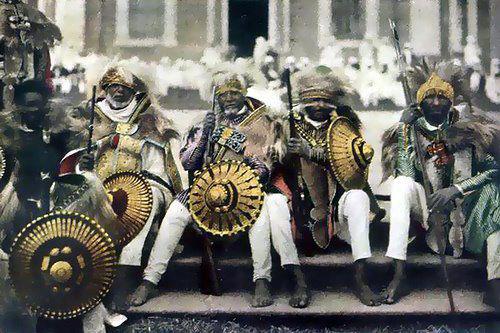 At the time when most of Africa was either directly or indirectly colonised by Great Britain, Ethiopia, a sovereign and independent kingdom was betrothed by the government of Italy which was underrated by its own neighbouring cohorts.

The government of Italy run by prime-minister Francesco Crispi decided to colonise Ethiopia using two great advantages, one: England being under pressure because of France and Germany and, two: the fact that Ethiopian lords were going through power struggle.

Italy pretended to be a great ally to Lord Menelik of Shewa (who was planning to take over the whole of Ethiopia). A premeditated plan to entrap him with a treaty that would allow him bring in ammunition to fight against other lords but mainly Ras Mengesha Yohannes of the North.

Menelik signed the treaty of “diplomacy” known as the Wichale, assuming Italy would help him in his fight to unify and rule the country which was under great power struggle between rival lords at the time. However, article XVII of the Treaty of Wichale or (Uccialli Trattato in Italian), had two versions.

The Amharic version states: ‘The Emperor has the option to communicate with the help of the Italian government for all matters that he wants with the kings of Europe.’

Many attempts by Menelik failed to correct the misinterpretation of the text, but indemnified the Italians with the right to invade Ethiopia. The trick was eminently simple, the kind that had been played on native rulers by European traders and settlers for centuries. As far as Italy was concerned, The Ethiopians were nothing more than unsophisticated barbarians.

Menelik called upon his people from every corner of the country to join him at this determining instant, saying “Enemies have come who would ruin our country and change our religion.

They have passed beyond the sea which God gave us as our frontier….These enemies have advanced, burrowing into the country like moles. With God’s help and your assistance I will get rid of them”!!! And so the Battle of Adowa took place on the 29th of February 1886 (during the night).

The angry and intolerant people of Ethiopia who fought against the well-equipped Italian troops, included men, women, the old, disabled, monks and priests. Most of them armed with just machetes and knifes.

The Battle of Adowa cost the lives of 289 Italian officers and 2,918 European soldiers, an additional 954 European troops could not be found, while 470 Italians were wounded. Some 700 Italians fell into the hands of the Ethiopian troops.

About 70 Italians were tortured to death before Menelik discovered it and put a stop to it. From the Ethiopian side an estimated 7,000 warriors died at the battle, and 10,000 were wounded.

“In the midst of this turmoil I was retiring… surrounded by a few groups of brave men who were still kept in hand by their officers… I noticed a walled-in enclosure, perhaps the ancient cemetery of a ruined church. I endeavoured to renew some kind of resistance in order to protect the retreat – and I collected Alpini, Bersaglieri and other white soldiers with officers among them…’Viva l’Italia,’ I called out, grasping my revolver; and this shout was repeated by perhaps a hundred mouths, parched by thirst and bloodstained!…An instant later the Amhara gained a position overlooking the spur; and every moment the confusion kept increasing owing to the waves of men swept by the hail of bullets, the sight of the dead and dying – while my heart was being torn in two, as I despaired of ever being able to give an order or of getting it out.”

After the end of the war, Italian and other European soldiers were released in exchange for payment of a 10 million lire ‘reparation’ by the Italian government. The political consequences of the defeat were even greater. After news of the devastation reached the ears of the people of Italy, angry crowds protested against their government.

Humiliated by the absolute failure of his colonial policy, Prime Minister Crispi and his cabinet resigned. Menelik made two simple demands of the new government in Rome: The abolition of the Treaty of Wichale and the Unconditional recognition of Ethiopia’s independence.

March 1st or Yekatit 23 in the Ethiopian Calendar is a national day of celebration for Ethiopians, The victory of Adowa on this day in 1896 was won by Ethiopian patriots who paid a price for victory that goes down History forever.  Ethiopians remember this day with inordinate pride.